Instances are provisioned from a Meeting Type and are tracked on the Instances Page. Any edits to a Meeting Type will only be reflected in new instances which are created after the edits are published. A Meeting Type's purpose is templated provisioning of unique copies of itself. These copies are known as Instances.

The Relationship between Meeting Types & Instances

Minimum requirements to create and activate an Instance are - a Host, a Guest and a designated meeting type. The Host is the Kronologic User on whose behalf, Kronologic is scheduling the meeting. The guest is the contact with whom the Host wants a meeting.

Instances can be created manually from the Instances page or the Contacts page, automatically from a CRM (Salesforce or HubSpot) through Channels, or in bulk using a CSV Upload. If created automatically or in bulk, an instance needs to satisfy the 3 requirements listed above - A Host, a Guest and a meeting type - to be activated.

There are three specific definitions to understand here:

1. An Instance Phase is a broader category in an instance's existence. There are 3 Instance Phases, which are typically referred to together as an "Instance Lifecycle". These three Phases are Provisioning, Active and Final.

3. Associated with each Instance Stage are Guest Statuses, which are mostly determined by the Guest behavior (response to the meeting invite or the lack thereof). Like Instance Stages, several Guest Statuses exist within each of the 3 Instance Phases. A Guest Status gives information about Guests that have been invited to various Instances.

In this phase, Instances can be created manually by providing, at the very least, one of the following three attributes - A Host, a guest or a meeting type. This can be done manually from the Instances page of Kronologic. Instances can also be created using the Import Channels feature from a CRM or can be uploaded in bulk, from a CSV file. An Instance lives in the provisioning phase until the Instance is fully assembled, with all the associated validations.

The three Instance Stages that are possible in the Provisioning Phase are:

When an Instance is in a particular Stage in its lifecycle, the guest can be in different statuses too, based on their behavior. During the Provisioning Phase of the Instance, regardless of the Instance Stage, the Guest status is always "Staging". The guest status "Staging" implies that the Guest is ready for meeting attempts and is waiting for Instance activation.

Once a fully initialized instance is activated, it enters the "Active" Phase. There are two modes of operation within the the Active Phase - Active Scheduling and Manual Scheduling. Active Scheduling is the process in which automation and A.I are at work to automate and monetize a user's calendar. If there is an out of bounds occurrence, Active Scheduling is switched to manual scheduling, and the Host is notified to take control.

In the Active Phase, Instances can be in the following stages:

Scheduling - The Instance Stage is "Scheduling" when Kronologic is attempting to schedule the meeting with the Guest. The Instance may have sent a meeting proposal and is waiting for a reply or is making a second or third attempt or the Kronologic AI Engine is not able to figure out the response from the user and the Host is asked to take control etc. The Guest statuses possible at this Instance Stage are:

Scheduled - An Instance is in the "Scheduled" stage, when the guest has accepted the meeting invite and the meeting start time is in the future. The only Guest status possible at this stage is "Accepted"

When guest behavior brings the Instance to a phase where no further activities are necessary or possible by Kronologic or the Host, then the Instance in a Final Phase. In this Phase, the following Stages are possible:

Completed - An Instance is in the "Completed" stage if the guest accepts the meeting and the meeting end date/time is in the past. The only Guest status possible at this stage is "Accepted"

No Quorum - An Instance is in the "No Quorum" stage if the Guest has declined the meeting or has not responded at all, or has responded and meeting intent is not clear from the response.

Guest statuses possible at this Instance stage are:

Declined - The guest has declined the meeting invite.
Responded Unknown Intent - Kronologic AI has not been able to determine guest intent and is not proceeding with meeting attempts.
No Response - The Guest has not responded at all.

Canceled - When the Host deactivates the meeting manually through the instances page after the meeting has been activated, the Instance goes to a "Canceled" stage. 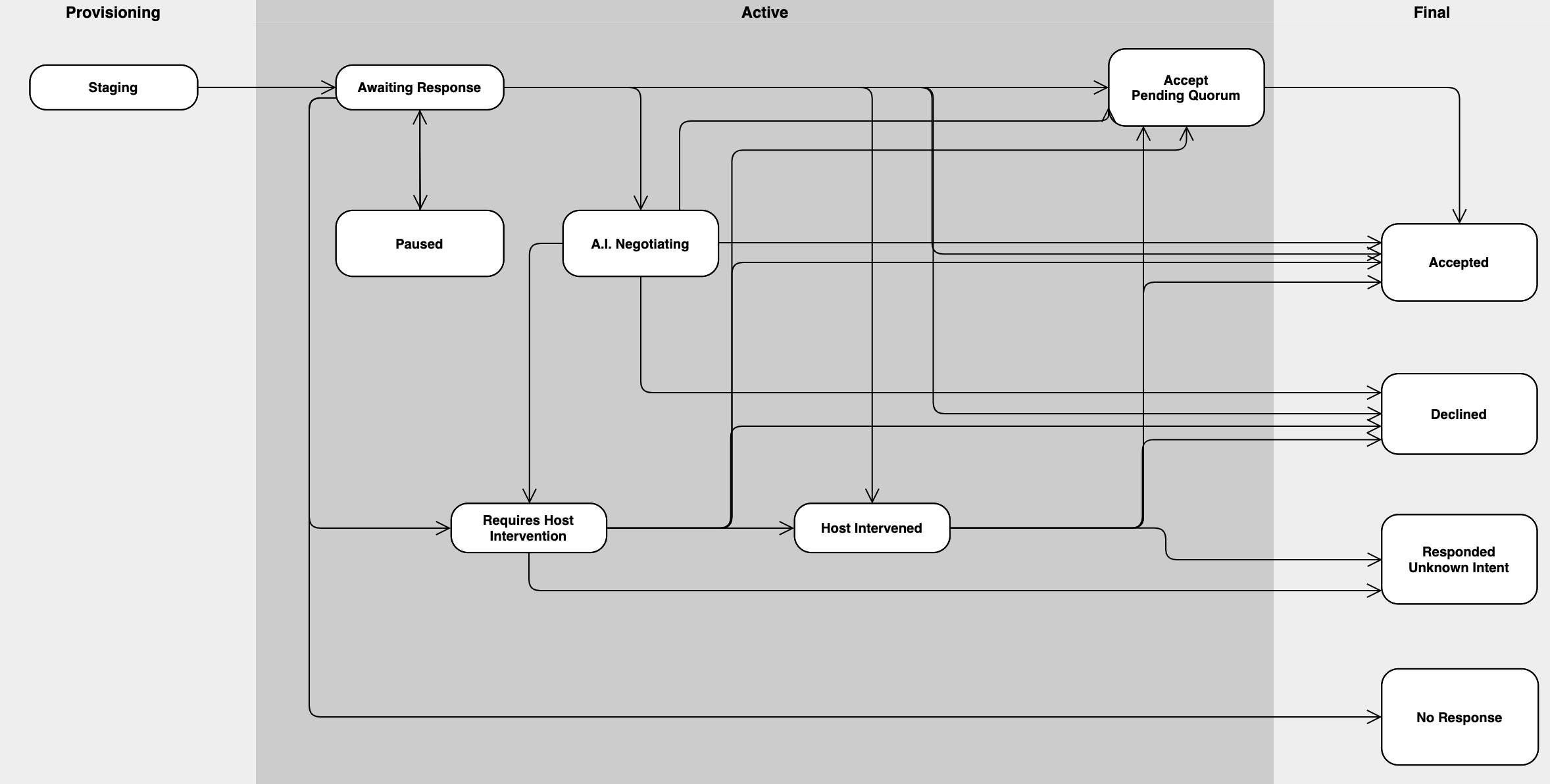 Routing is how an instance is assigned to a Host. Routing can be done either manually or automatically. Automatic routing can occur at two points in an instances life cycle -

Additionally a contact can have two instances of the same type, as long as they are active at different times or, in series.

Email attempts to set a meeting are defined in the Meeting Type. Each attempt is made by an algorithm designed to optimize for instance throughput and maximizing accept probability. A good estimate is that an instance with 3 attempts will take about 1.5 weeks to fully process, if there is no response. Typically, a consecutive attempt is sent within hours of the previous unaccepted proposal.